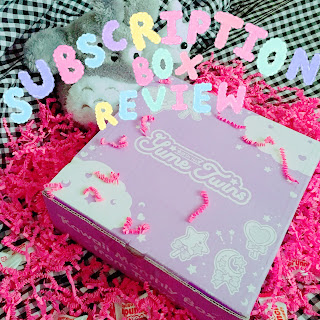 Hello everyone!! I know introducing a new blog post segment isn't the best way to get back into the groove of blogging but I was just SUPER excited to show you all this! I'm not signed up to a lot of subscription boxes but I tried out Kawaii Box by Japan Crate and I've been wanting to try out the Ipsy box since a few of my besties have tried it out and a lot of the products look promising!!

It's kind of funny because I actually found out about the Yume Twins subscription box from a Facebook ad and I usually despise those hahaha~ But I was just scrolling past when I saw a burst of rainbow pastel and I had to click on the link *__* Just like Kawaii Box is under another main brand (Japan Crate), Yume Box is under the main brand Tokyo Treat! 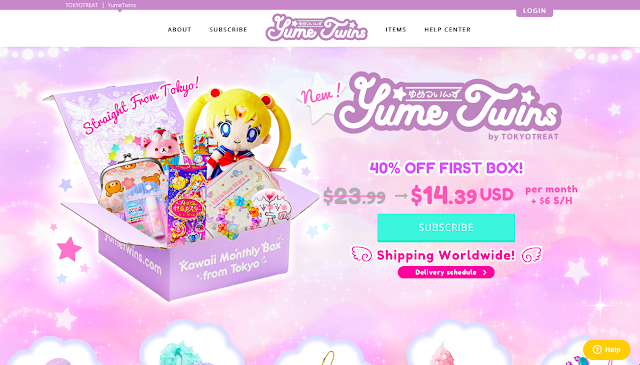 So what do I mean when I say you get a box a month? Well if you've ever subscribed to a monthly magazine in the mail or something similar you know you have to pay a certain amount of money either for a whole year's worth of magazines to be delivered or maybe only for a couple of months. For this box and the Kawaii Box these were the options I was given: 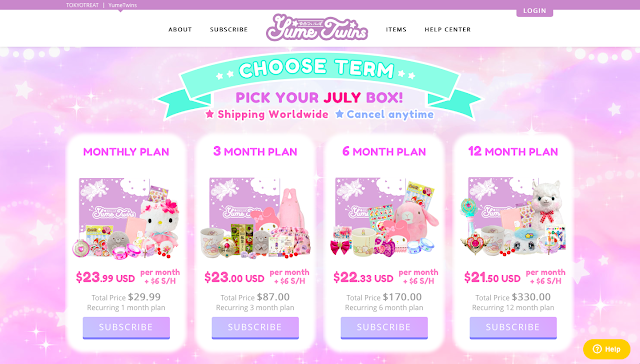 As far as I know there is no option to buy just one box to try out on it's own for Yume Twins or Kawaii Box. However, the way I try it out is I buy one monthly plan which will get me a box for the coming month and then right after I contact Customer Service and cancel my subscription. This way I've paid for one box for one month but I won't be charged for the next month's box! Some people like to go for the three month plan so they can get a feel for a range of products the box delivers. As you can see it's a bit cheaper to subscribe to as many months as you can but not by much so try to only sign up for as much as you can handle financially!!

One tip I have for subscribing to these sorts of boxes, since they tend to be pricey and also a surprise (think of it like a giant gashapon you get once a month!) it can sometimes be either a hit or a miss, is to follow the company on social media for hints about the boxes. For example, I follow both Kawaii Box and Yume Twins on Instagram. Although Yume Twins is still very new (so new I'm reviewing their grand opening box!) they have hinted at the theme of the July box already! And it's great to know the theme of an upcoming box so you can consider whether it's worth it to pay $30 that month or save it until they have a box you like. I have found that in the past I have gotten items I didn't like all that much in a box and maybe only one thing I did like, which is a big downside of subscription boxes. But if you have a little extra money and are feeling adventurous they can be really fun and it's so nice to know you have a surprise package of goodies coming to you hahaha ^.^

Alrighty so now that we have the basics of subscription boxes covered, let's get on to the June Box Yume Twins unboxing and review!! :3

This box came with 8 items of varying themes. There was no theme announced for this first box since it's so new but one thing they did promise was that there would be a limited edition Sailor Moon plushie! The overarching vibe I'm getting from this package seems to be magical girl though. Half of the items in this one were related to some sort of magical girl anime so I was STOKED lolol~


Let's look at the magical girl related stuff first, shall we? ^__^
Which Sailor Moon plush did I get??

One of the things I noticed people were concerned about when Kawaii Box released their first box was that some of the toys and knick knacks were not officially licensed products (aka knockoffs). One thing Yume Twins directly advertises on their website is "fully licensed merchandise from Japanese brands," and so far they've delivered truthfully! Yay!

This is one of those cute and also functional items that come in every subscription box it seems haha. The texture of this cloth is kinda rough but I still use it on my face to dry it off anyways >.<

When I first opened the box, besides the Pluto plush this compact looking thingy was the first thing I saw :0) It's so cute!!! I had a feeling it was a candy dispenser type thing like the ones they sell at Uwaji:

I don't usually eat the candies that come with these sorts of things but I ended up eating these ones. Not that they were good or anything, they kinda tasted like really hard skittles or something, they were just cute so I ate em haha. I didn't even put them in the dispenser >.<

Right now I'm using this to store bobby pins so they don't get lost in my purse. It's a decent sized compact (it fits in the palm of my hand, it's pretty thick though) and could probably hold mints, loose purse change (if you like the jingly noise haha), safety pins etc.! It's made of plastic so if you take it around with you in a full backpack or purse it might crack so I still suggest you be careful with it!

Next up:
All the pretty magical girl stuff makes me weep uhuhuhu T__T This is just another one of those blind box type things with gum or candy and a small toy. Mostly meant for kids (hence the small size of the ring) but still cute nonetheless!

I got the pretty golden ring. So far I've been very happy with the selective pieces in this subscription box! I tend to have bad luck with these types of things hahaha >.<

I love how many blind boxes there were in this subscription box! Gudetama items are becoming more and more popular these days so he's a bit more of an accessible character to get merch for. Still, I can't resist a super cute keychain!!

I got the mustache one and it's soooo cute!! And it perfectly pairs with the next item I got in the box:

I don't know if you guys know my love for coin purses. Perhaps I'll make a coin purse appreciation post and show you all my ~excessive~ collection hahaha >____<

Ya don't have to use this as a coin purse of course but it's just a nice little pouch you can use to store small things that might get lost in your bag! Super cute and very handy :3

At first I thought this was some sort of poster that comes with gum or something, but actually:

It's a cute little 3D popup card with Funassyi puffy stickers!! I'm probably gonna end up sticking these on the front of my journal or something, they're so cute!!

This was the item I was least excited about but it's still very useful and adorable! It's a small notebook with two different paper designs. I think this is a San-X character.

This box and the Kawaii Box both came with cute little booklets that tell you what the different items are and sometimes they even hint at the next box! I forgot to take a picture of it here but if I remember later I'll show you all what it looks like!
TL;DR:

Was it worth it?: Since these are licensed products and some of them can be quite pricey (the Sailor Pluto plush seems like it would be the most expensive in this box) I would say, yes! This was quite worth it! Some of the little items like the notebook and probably even the sticker set are probably considered to be on the cheaper side, but please know that when you order pretty much any subscription box little items like these are a given! They're simple "filler" pieces that still fit in with the items of the box and add to the item count and whatnot, but usually they're useful so it's ok!

Quality: The quality of the items were perfectly fine. None of the boxes were squished up or anything and the plush was nicely wrapped in it's plastic still. The only thing that wasn't inside plastic or a box was the cloth but it still had a sticker on it so it wasn't used or old looking or anything haha.

Shipping: This box shipped faster than I expected! And actually the box became so popular that originally the company was going to make this their July box but instead it became their June box because of the high demand!! The box they shipped it in is super cute too ahhh!

Will I re-subscribe?: Since I'm following them on social media and they release hints about upcoming boxes I think I'm gonna try out another box when they have one that interests me. Their July box is apparently Sanrio items and I have quite enough of Sanrio stuff already haha.


Thanks so much for reading through this review! I hope you found it helpful! Lemme know down below if you have any questions about the products or the ordering process, I'll try my best to help! As always I wasn't sponsored by Yume Twins to do this review but if I'm ever sponsored to do reviews in the future I'll let you all know beforehand! And being sponsored will NOT change my opinion on any items I review! I'll always give my honest opinion on my orders!