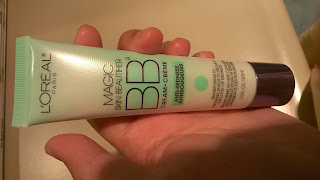 Hi guys! I'm back with a drugstore beauty product on this lovely Saturday ^.^ I don't usually buy drugstore products because I worry about my sensitive skin. But I really wanted to try an anti redness product because of my recent redness flareup from experimenting with hair removal strips 3: I found some online that I wanted to try, but I didn't want to spend money on the good stuff until I knew if the green color theory thing actually worked! As it turns out, the cream I wanted to buy online was actually cheaper than this one that I bought at the drugstore T___T Oh well hahaha~

Anyways, we went to Walmart so I could pick up some supplies for upcoming DIY projects I have! And while looking for my mom in the cosmetics section I remembered that I was looking for a green primer! Instead I noticed that these green BB creams by L'OREAL were almost all gone. So I did the thing where I thought that since they were all gone they must be popular and work well! lol. I think it was a bit over $8 after taxes and the one I wanted online was $6 phooey.

The next day I decided to try it out! Even though we were only going local hahaha~ I actually ended up being glad that I bought a BB cream instead of looking for a green primer or base just because I like my current primer and my BB cream/sunscreen for summer kind of washes me out a little hahaha.

This L'OREAL BB cream claims that it "transforms to universal shade to reduce the look of redness" and I thought to myself, what is a universal shade? Uhh?

When I first opened it up I was pretty surprised lol. It's so liquid-y!!! It's thicker than water but flows like it. I was borderline disappointed with that at first. But I thought to myself, maybe I just need to shake it first? SO I closed it back up and shook it. Opened it up again, still the same consistency lol. I thought to myself, "oh man, is this a dud?!".

Before trying out the BB cream I just put some primer on:

I didn't add concealer or anything since it hit the redness pretty well. I could still see the spots but they were a muted tan color rather than pinky red after applying the BB cream, which was better I think.

***TL;DR:
Consistency 7/10: It's so runny it's kind of annoying to put on. Maybe I just don't know enough about makeup yet? Is this supposed to be runny like this? I mean it's fine on my actual face because it's so runny and light it's like I'm hardly wearing makeup. So I'll give it props for that. Maybe I'd like a whipped cream better because that's light but not runny to put on? Hmm I'll look into that.

Coverage 8/10: I like this compared to my other BB cream right now since I'm still slightly tanner than I am the rest of the year since summer is setting. This one doesn't wash me out like my other BB cream, yay! As for covering redness, this coverage is nice and light and makes my makeup look natural~ At first I couldn't even tell if it worked or not and I'm not sure how I feel about that so for now I'll give this an 8 out of 10 since it's the first green tinted anti redness cream I've tried and I have nothing to compare it to yet hahaha.

Scent 7/10: It has a chemical smell that you get used to once you put it on. It isn't overpowering put it is a little off putting at first I must say. After putting on the rest of my makeup I didn't seem to notice it, so I guess the scent it ok.

Ease of use 5/10: Like I said, since it's so runny it can be difficult and messy to apply sometimes.

Works overall 7/10:It hasn't caused me to break out yet! And I've been using it for about a week now so that's pretty nice :D Doesn't seem to irritate my skin and it doesn't wash me out like my other BB cream. So I guess that means it's working for me for the most part right now. Nice.

Would re-buy?: Even though I have nothing to compare it to right now I don't think I would re-buy. Most other months my face is somewhat pale anyways. And I noticed that this BB cream oxidizes and turns an orange-y shade so unless your natural skin tone blends well this this orange-y tone I don't recommend this. I'm not disappointed but I'm not sprung either. Just neutral about this right now I guess?

Thanks for reading as always!! I might keep a lookout for other green BB creams to compare to this on in the future. I will keep you updated on how I feel about this lol.