~What's In My Makeup Collection?~

Hi lovelies! I realized while writing a different post that I wasn't completely sure what I have in terms of makeup right now. So I decided to go through that with you guys! Like I said in the past, I'm definitely not an expert in makeup or anything. But anyways, here's what I have collected over the past one and a half years or so starting my makeup wearing adventures! 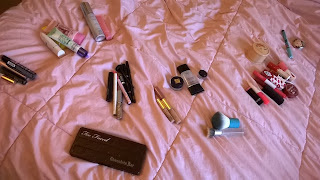 Instead of going in order of what I first bought when I started wearing makeup (like I originally wanted to) I just took pictures of everything in pairs and put them in order I wear them in haha ^.^ 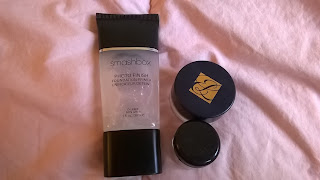 SO! First things first! Here are all my primers. The main one I use is the Smashbox Photo Finish all over a clean face ^__^ Next to it I have eyelid primers, the Estee Lauder one is one that my mom wasn't using so she gave it to me ahha. But I don't really use it all that often, I probably should though. It might help with the smudging. The smaller pot below that has a sample from a Too Faced eye primer that I can't remember the name of but it smells awful and I gave up using it hahahha. 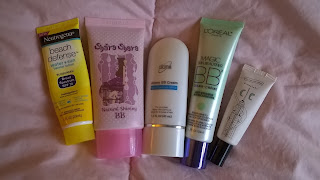 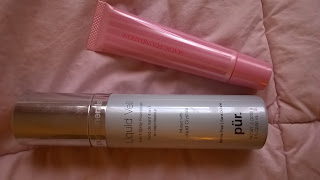 Next up is cream/foundation. These days I use BB cream a lot more often than foundation. I've found that depending on the product you will get different coverage results, whether it's a BB/CC cream or foundation doesn't really make much of difference. All of the BB creams I've tried so far have actually given me more coverage! I always thought foundation would do that but, trial and error! What can I say? Hahaha. If I'm wearing anything that doesn't already have SPF in it I usually put the Beach Defense sunscreen on right after putting on primer, sometimes even before putting primer on because it's light and hydrating and doesn't irritate my skin ^.^ The BB creams on the top picture are in order of when I got them, not my preference (although I got the CC cream and Shara Shara things together, oops lol). If you read my blog from the beginning you might remember that I swatched the Shara Shara and Too Cool For School CC cream from my Meme Boxes here. Using the Atom BB cream (white) and L'OREAL BB cream (my review here)together is my current favorite as it matches my skin tone the best! I used to use the Shara Shara BB cream in the winter time because it's VERY ashy looking and washes me out. It has grey tones that seem to counteract my redness but it's just tooooo light for me right now hahaha. The Atom BB cream is also too light so I like to mix it with the L'OREAL (this one first to get rid of redness, then the Atom on top of it because it also has SPF) since it's a bit darker and blends nicer with my current natural skin tone. The CC cream probably has my favorite scent and texture of all my BB creams but it is also too light for me right now. Asian cosmetics tend to be on the lighter side so make sure you are wary of that when purchasing them!

As for foundations the Pur Minerals Liquid Veil (which I did a review on here) is my favorite of these two because it matches my skin tone better (even though it's still kinda light) and is build-able since it's a spray type foundation! The Calypso Magic Foundation I also (sort of) did a review on here and has more one application coverage than the Liquid Veil and is not my favorite shade. I tend to use it on my neck and it blends with the rest of my makeup on my face somehow hahahha. 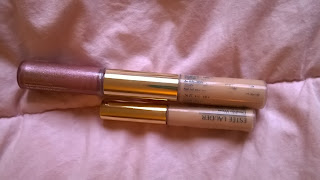 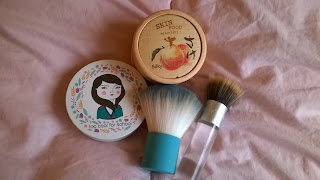 Depending on whether I forget or not I usually put powder on next to smooth everything over. I use the kabuki (blue) brush with the Skinfood powder, I just find that it spreads things better than the puff I guess haha. And I take the compact with me to school or in my purse even though I still get oily after a few hours T__T The other brush is one that I use with the Pur Minerals foundation!

Sometimes I just stop there, but when I'm really feeling up to it I also add a bit of eyeshadow: 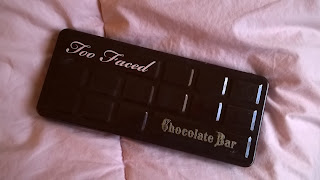 This is the only eyeshadow palette I have and I love it so much I don't need any other ones <3__<3 I did a review of this here as well! I basically use only two colors because I'm lazy and boring and I don't experiment with colors at all ahhaa. It keeps me from looking less dead in the morning tbh. I also have a lil eyeshadow brush in there that my mom found and gave to me because apparently all her eyeshadow palettes come with their own brushes. Step up your game Too Faced, I wish this came with a cute chocolate brush T__T

After my face is all done I spritz some of my Shiseido face mist (which I might do a review on in the future) all over my face and neck and pat to set: 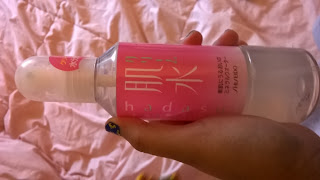 I'd say on average this past summer I was usually done with my makeup after putting on a bit of mascara! Even though my eyelashes are already pretty long, I like the look of extra length ^.^ I'm a bit greedy you see lol. I don't curl em' though, just mascara: 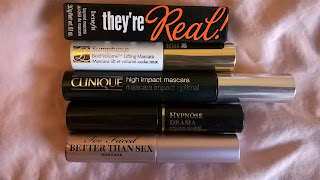 These ones actually are listed in order of my preference. Mostly because a lot of them (all of them?!) are basically free/from my mom since she gets them for free when she orders things lol. Benefit is my newest one and it's AMAZING. NO CLUMPS. And it makes my eyelashes so even and long ugh it's beautiful. Before I had that one I used that white Estee Lauder Sumptutous Bold Lifting mascara. I think I used to have a Clinique volume one that I used more often but I can't find it?! The other Clinique High Impact mascara is also quite good too. It has a nice long wand and the bristles on the brush are smooth. I rarely get clumps from the Clinique ones as well ^.^ The Lancome Hypnose Drama mascara is one that I don't use often so I'm not sure if it works super well. It's one that's often at the bottom of my makeup bag for some reason lol. The Too Faced Better Than Sex mascara was the most disappointing personally. Two of my other friends who have tried it (hi Karyn and Angelina if you guys read my blog!! LOL) said it works nicely for them. But for some reason it's just SOOO clumpy for me! And it's frustrating because in the beginning when I first got it it worked well and the brush has so many bristles that the volume and impact of lashes is AMAZING. But now it ALWAYS CLUMPS and I just can't.

Even on days when I don't wear makeup I like to wear some lip stuff!! LIP. STUFF. IS. MY. FAVORITE. And of all the lip stuff, lip tints and lip milks are my absolute favorite!!! So of course my lip stuff collection reflects my obsession lol:

These are listed in order of my preference (except that Shara Shara, I just put it on top ahhaha) and I think there are so many that I'll just do a mass review on all my lip stuff because I love them so much lol. But basically I wear the four in the first top row pretty much all the time.

Aaaaand last but not least! On school days when I'm feeling super fabulous (or I'm feeling really crappy but I want to look fabulous!) I wear eyeliner! Liquid is my favorite because it's easiest for me to control ahha. I've always used liquid since using eyeliner but I have a few non liquid (they might be pencil or something?) that my mom gave me because she doesn't use them. As you can see I get a lot of makeup leftovers from my mom LOL. 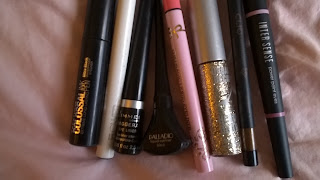 The eyeliners are in order of how often I use them. The Colossal eyeliner is my favorite because it's basically a giant black marker! And since I like drawing and stuff I'm very use to drawing lines with markers and things. My hands are quite stready. I've even applied eyeliner while on the bus before LOL. But that was back in winter quarter when I was a pro and now I'm back to being a novice and my wings aren't even because it's summer OK?! /rantover LOL. The very first makeup I ever got that wasn't lip stuff was the gold sparkly eyeliner and that was in high school! My mom was ok with it because she said it looked cute and didn't make me look mature >.< hahaha The Flower eyeliner is also one of my favorites. It's a brown one from a makeup line that Drew Barrymore has(had?!) but I don't see it in store anymore!! That makes me sad because this had the nicest light brown color and had a marker like tip as well. I hope I find it in stores again! The Rimmel and Pallaido are about at the same level since they are liquid but you have to dip them and stuff. The color is good and they're smooth to put on, but for some reason my eyeliner just ends up looking bad when I use these? The brushes are a lot stiffer is probably why. That's why I mostly use these for tight lining. The pink one in the middle is K-Palette 1-Day Magic eyeliner in dark brown. It has a thin side and a thick side of the brush (though it's one brush) and I would love it more if it wasn't so difficult to handle because of that. Perhaps I just need more practice using it hahaha. The last two are a brown Clio pencil type eyeliner in brown and an Intersense dual eyeliner/eyeshadow set in pink. I thought the pink was much stronger in the Intersense one when I first swatched it at the store. But when I actually tried it on at home you really couldn't see it. How disappointing lol.

The rest of the random stuff I have in my bag is some Shara Shara lip scrub (also from my Meme Box!), Softlips chapstick in vanilla, and some Princess Vera Wang perfume sticks, TonyMoly Bunny Perfume stick (pink), a few masks I don't use, and an aqua colored nail polish pen!

I hope you all enjoyed perusing through my makeup bag! It really all fits in one bag right now! LOL. For now. Let's continue my makeup adventures on here together, shall we? =^__^= And thanks for reading as always! <3