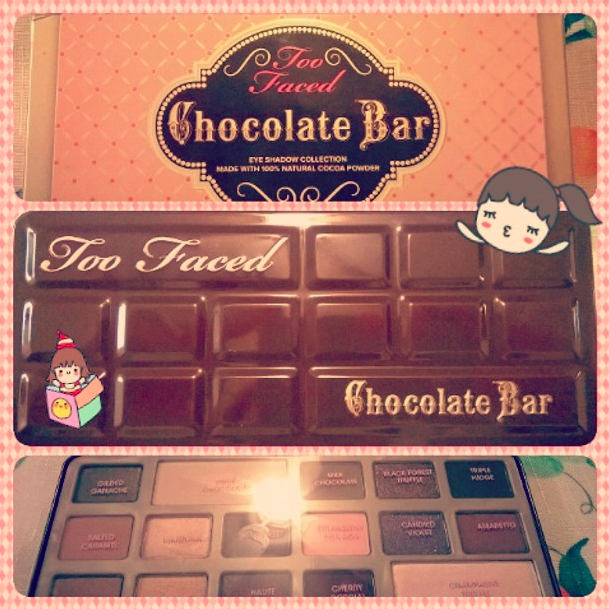 Hello every bunny! Happy Easter weekend! Hope your day is full of pastel loveliness galore!! Today I will be reviewing this Too Faced Chocolate Bar palette that I bought, maybe, three weeks ago or so~ I figured since I've been using it quite frequently I ought to talk about which colors I've been using most often and my overall thoughts about these eyeshadows! Do keep in mind as you read through this review, however, that I'm quite new to makeup and this is my first eyeshadow palette that I've ever used so that will likely be reflected in this review! Hahaha ^.^ So let's get to it then!

***TL;DR at the bottom of this post if you'd like to view the pics and skip on though ;D***

I originally bought this at JcPenney, kind of on a whim because I've been wanting it since I saw the packaging when it first came out however long ago. I mean that's basically what stole my heart in the first place, packaging always gets me! >__< And then I did some research on some other lovely blogs and found out that the palette is chocolate scented!! And then I knew I HAD to get it! So I saved up (aka didn't impulse shop for things like I always do T__T #jobless) and then splurged! I figured since there are lot's of neutral, everyday, basic colors in this palette I could use it on a daily basis and just learn how to use the same colors to go from a casual daytime look to a more formal night look when I need it! And like I mentioned I've never used eyeshadow before, maybe only a bit for homecoming in the past but my makeup wearing through high school was little to none! So I wanted a palette that I believed I could get plenty of "mileage" out of in terms of versatility and quantity. And this one seemed it fit the bill! (And then some with the packaging ;D)

I ended up returning the JcPenney one however and bought it at Macy's instead because they had a deal going on where you could get the Too Faced "Better than Sex" mascara and primer. Little did I know that Ulta had a promotion where you could get the mascara, primer, and eyeliner sample when you buy Too Faced T___T Oh well~ hahaha I'll do a review of the mascara and primer after the eyeshadow!

Upon opening the beautiful eyeshadow you can see the names of each of the eyeshadows on a plastic film type cover that's removable. I only kept it so I could use the names for reference for reviews, it would've been nice if the names were printed under the eyeshadows like I saw on the Semi-Sweet Chocolate palette for those who do a lot of makeup tutorials though!

Here are the colors I frequently use in the palette: 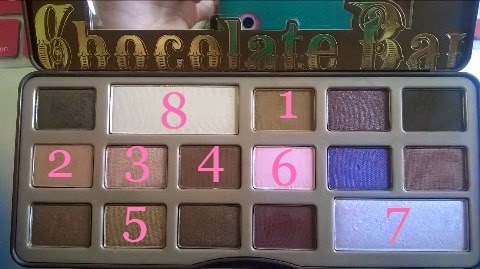 1. Milk Chocolate- I use this color the most! From contouring (which I just learned how to do and can sort of barely do, I think? haha >.<) to my eyelid crease! I haven't really looked up eyeshadow tutorials yet so I just put what I think will look good ^__^ And so far I like the look of this shadow right on my lash line when I don't want to use eyeliner and just mascara!
2. Salted Caramel- another color I use for contouring and a nice color I like to sweep over areas I think are too pale on my face as it adds a nice natural tan-ness~ The foundations I use are pretty light to I use this to liven up my face a bit!
3. Marzipan-This is my favorite eyeshadow so far as it's a shimmery pinky brown color that is quite subtle and simple!
4. Semi-Sweet- I use to contour my chin area and also as a lash liner as another eyeliner alternative ^.^ See how versatile this palette is?
5. Creme Brûlée- This is my second favorite eyelid color ( I like all the shimmery shadows on my lids!) and I use it when I want a fancier look since it has more of a gold tone than Marzipan but it's still quite subtle with a few strokes.
6. Strawberry Bon Bon- I think this is meant to be a blush! And the name is so adorable <3__<3 I tried it as a blush but I'm already kind of naturally blushy so I use it on my eyelids sometimes when I wear my pink eyeliner! I also like to apply it before the Marzipan sometimes and it seems to make the color pop a bit more~
7. Champagne Truffle- I was told this is a highlighter, also good for contouring! I put a dot of this on the inner corners of my eyes and sometimes even underneath my eyes to create a bright eye effect.
8. White Chocolate- Last but not least I use this color on top of my concealer around my nose and under my eyes sometimes when the bags are particularly dark and noticeable! It sets my concealer quite nicely I think ^__^

I have also tried the top right dark brown color for eyeliner but it's very pigmented and dark so I only use it when I really want to have a nice faux eyeliner look! The purple I haven't experimented with yet, which is surprising considering that's the only color I used every homecoming before when I used my mom's eyeshadow palettes! Hahaha 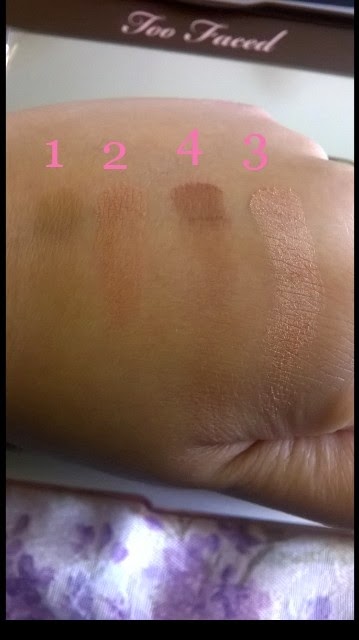 These are my top four colors I pretty much use every day and the order I put them on today! 1+2+4 contour, 3 eyelids! 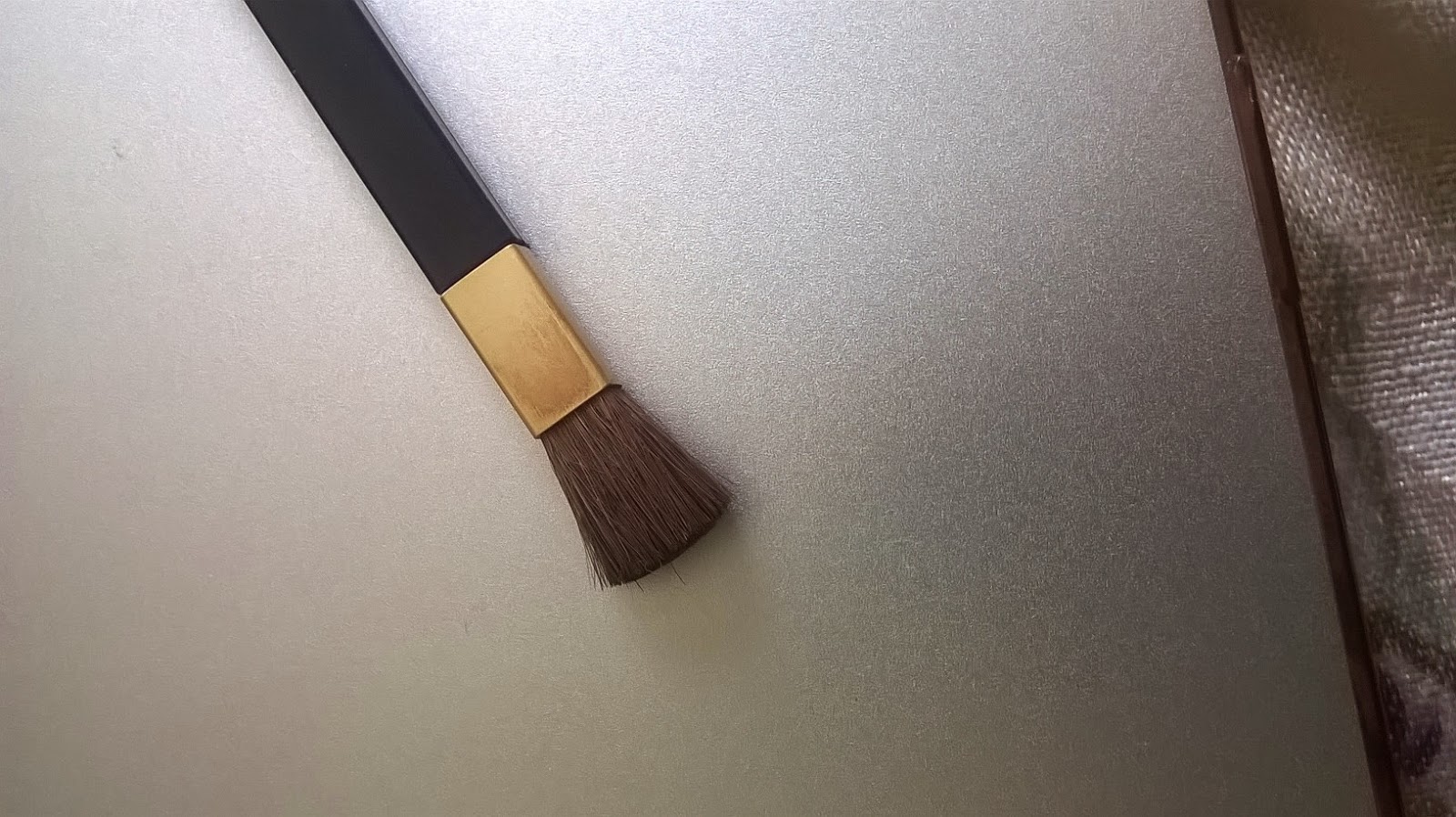 When I first got the palette I didn't know it didn't come with brushes so my mom gave me one she wasn't using >__< It does the job, but I don't think it's meant for eyeshadow hahaha oh well!

And like I mentioned this buy came with samples: 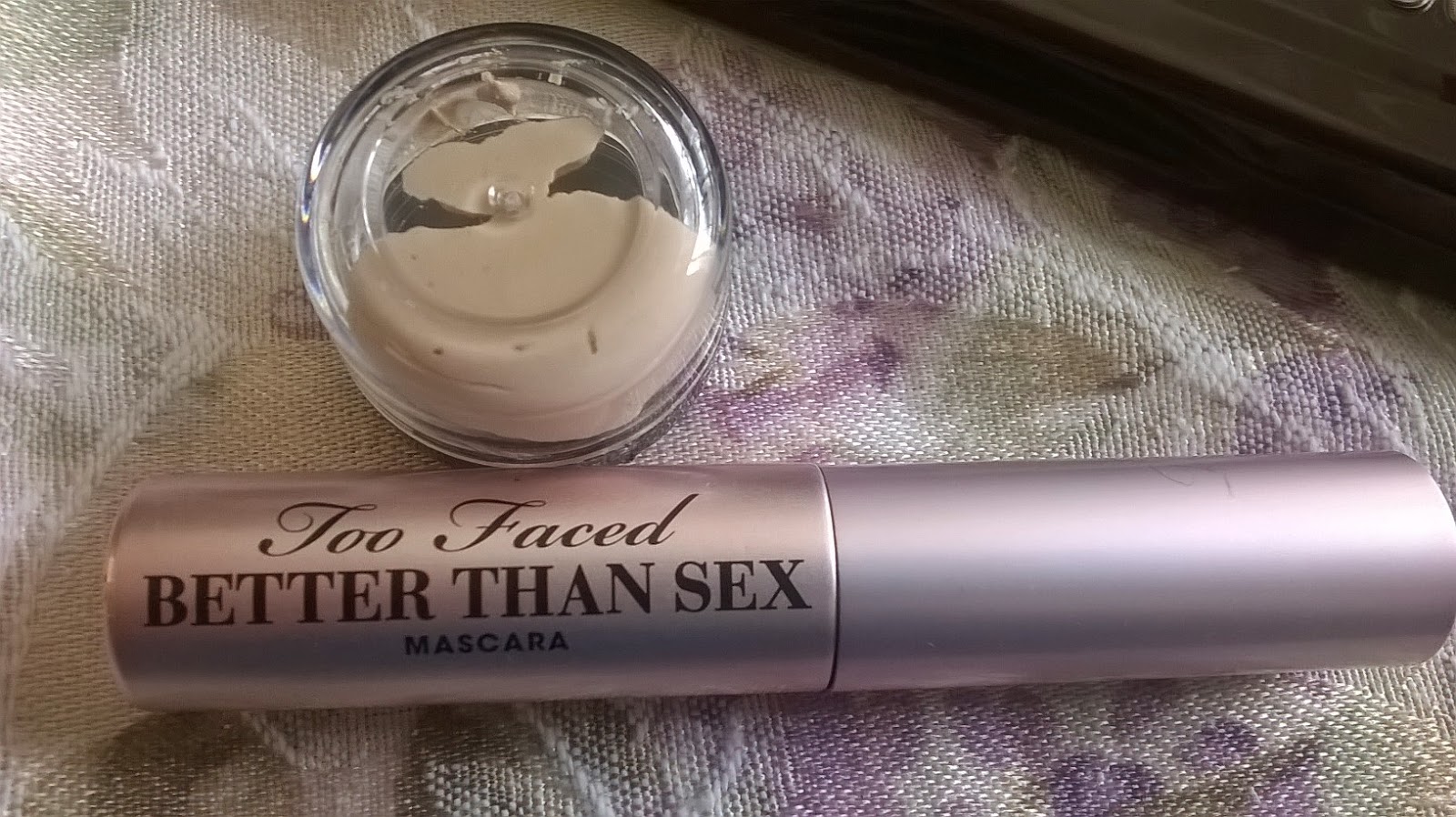 Up top is the Too Faced eyeshadow primer and the renowned mascara! Well I don't know if it's renowned but I heard some people were excited about this mascara. 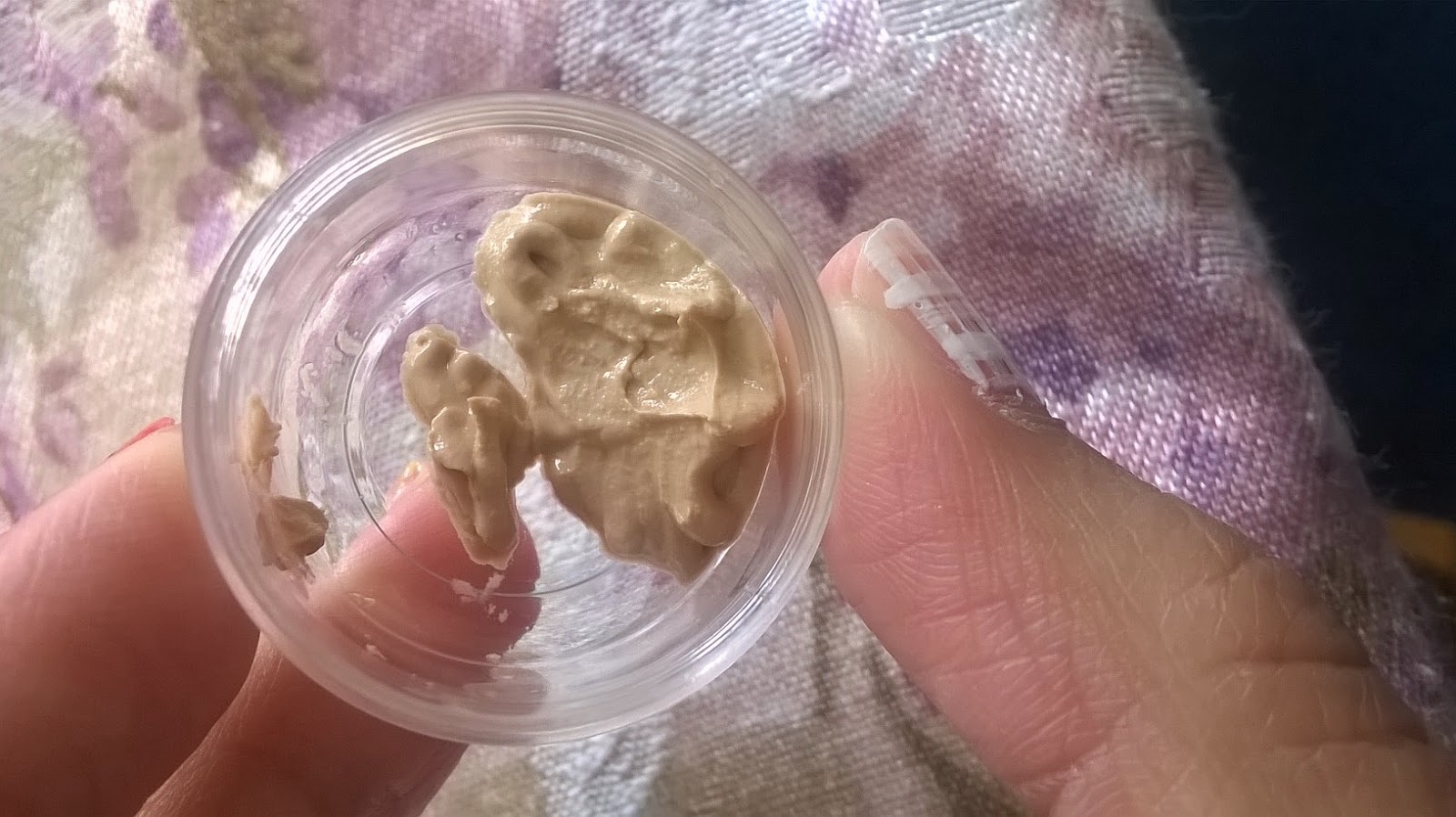 They ran out of the actual Too Faced samples so the lady squeezed some in this sample thingy for me ^.^ I was like ok yeah primer, you put it on before the eyeshadow and everything will be dandy! But this primer just has a terrible smell! It's pretty chemically T__T 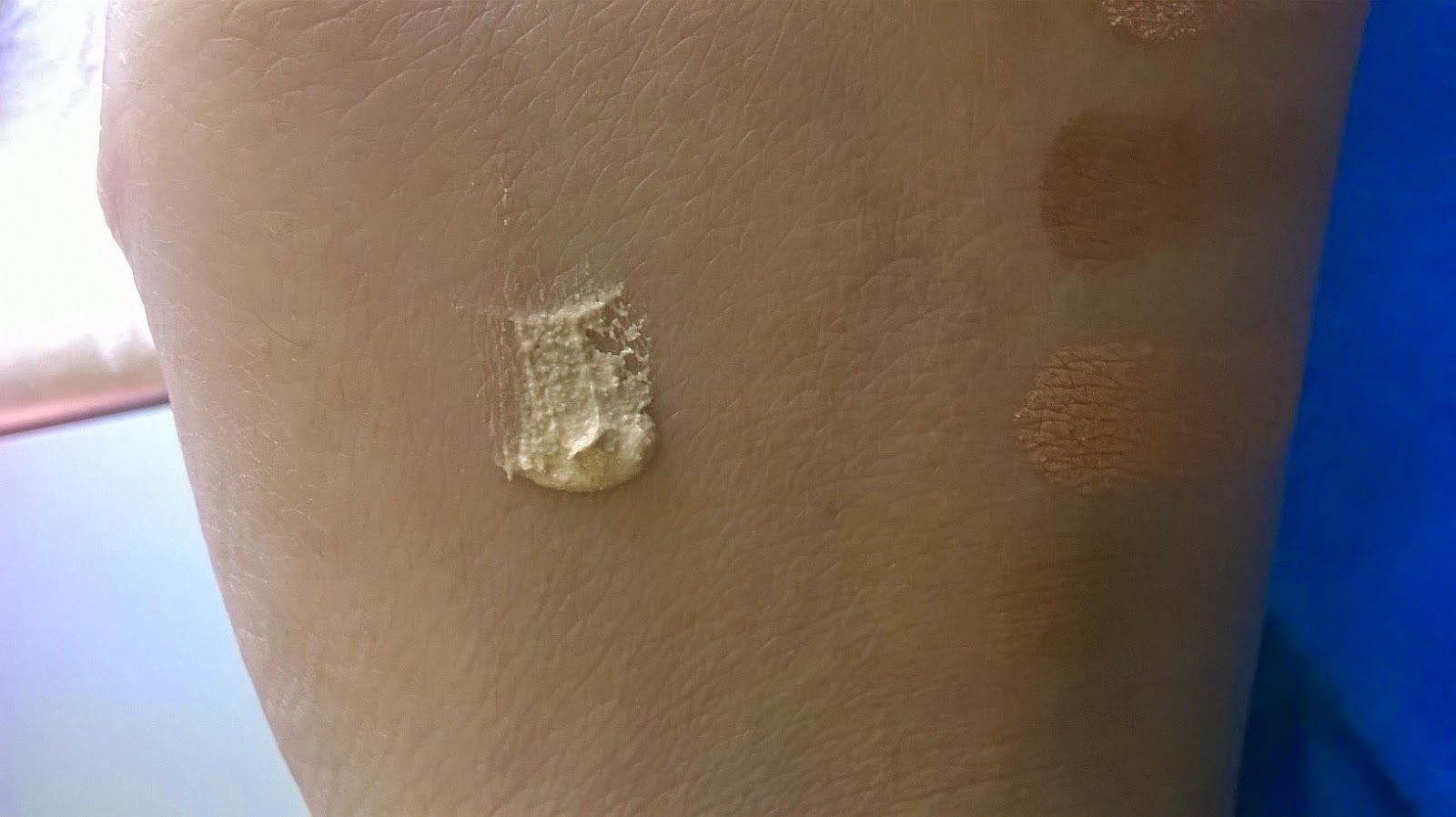 Here's what a dab of it looks like on my hand. 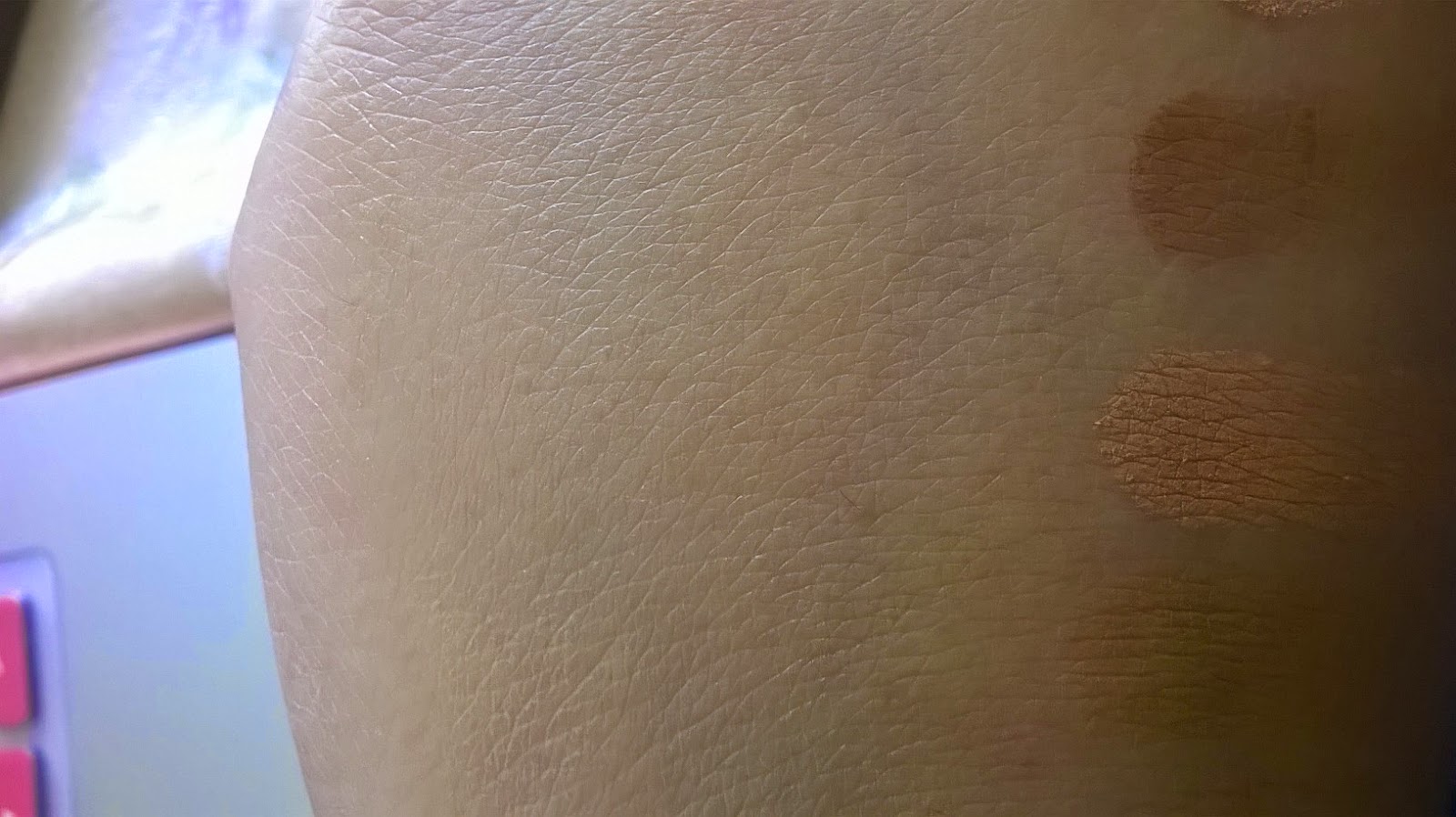 It seems to blend into your skin tone, I don't know if they have lighter or darker versions of this though. The feeling of this primer is also quite oily, I don't know if it's supposed to feel that way as the only primer I have ever used is the sunscreen/primer combo I got from a Meme Box. I don't think I'll continue to use this primer though 3: 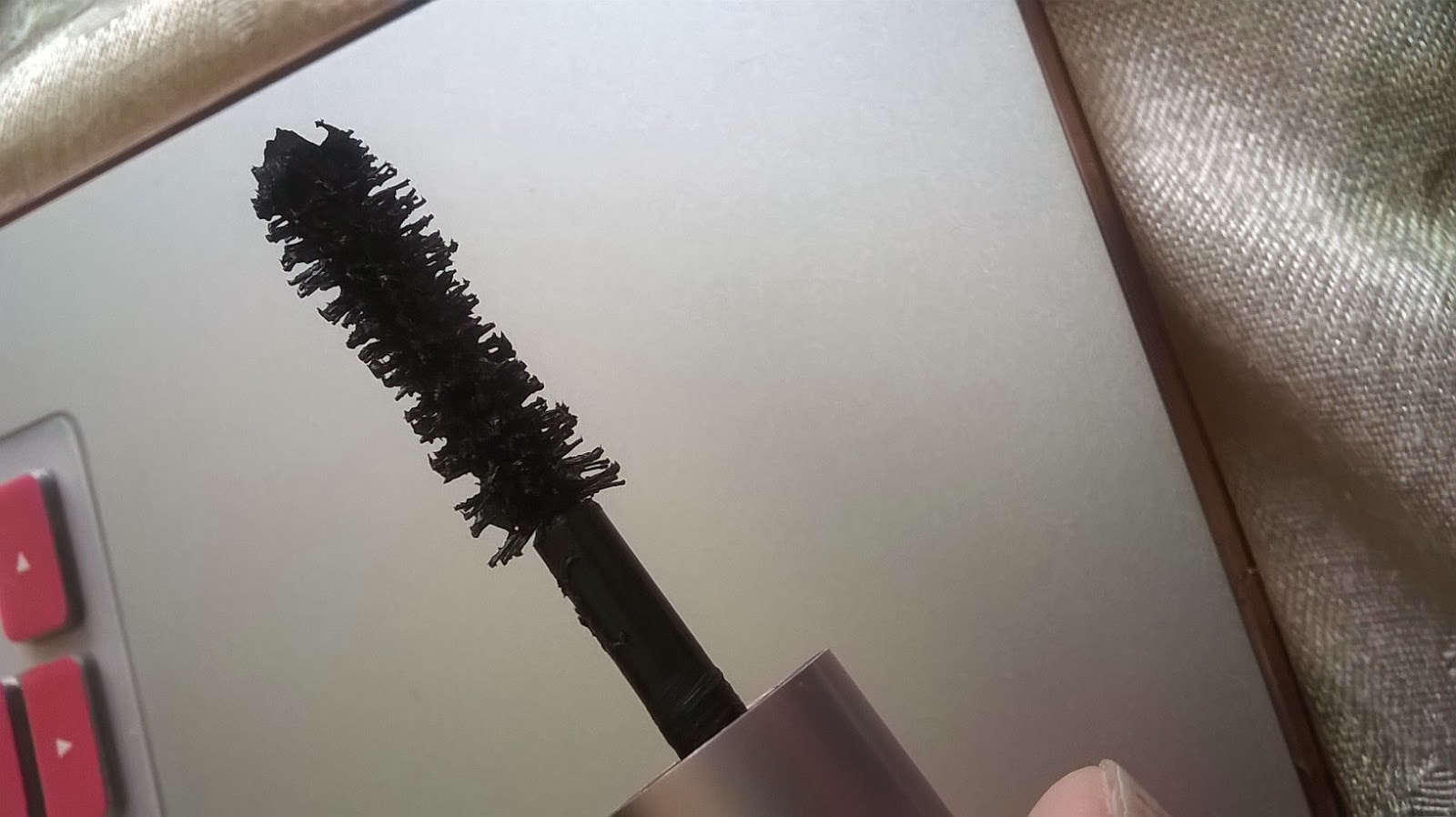 As for the mascara, I have a like/dislike relationship with it. It's the only mascara I currently have and when I first tried it I was disappointed. It was super clumpy and the brush is weird. Just look at it! All those bristles! I mean, lots of bristles is probably a good thing but for this particular one it just seems to make the mascara clump! I haven't read any other people's reviews of this product yet though so I don't know if this mascara is actually bad for everyone or if it's my lack of skill and practice in mascara application that made it so bad in the beginning. Now that I've used it three or four times I kind of know the procedure to make the mascara look quite nice. And in the end if you jiggle and flick up smoothly and quickly wipe your finger up your eyelashes when you see clumps, the effects of the mascara are quite pretty and I like the way it makes my eyes look huge!~ But I don't know if any makeup product should require such an odd technique of application so other than using up this sample I have, I don't know if I will actually venture to buy this mascara.

TL;DR:
~Eyeshadow- 10/10 would recommend for everyday wear, cute packaging, nice smell and quality. But BEWARE! Make sure your have proper eye brushes and things beforehand or plan to buy some with it! All in all, NO RAGRETS! WOULD RE-PURCHASE!

~Primer: 2/10 Smells icky, oily texture, seems to hold my eyeshadow well enough (though it seems to do nothing for the staying power of my eyeliner T__T)

~Mascara- 7/10 it makes me look like a pretty doll but the effort that one must put to apply it nicely is a bit much for something that should have a relatively easy application. The application process gets a bit messy is all I'm saying, and the results are still a bit clumpy at times. Somewhat on the fence about this one.

Thanks so much for reading my pretties! I know I mostly posted this just so I could keep up the regular blogging bit I hope you found it useful! Perhaps next time I'll do a post on how I do my everyday makeup? How does that sound? ^__^