Hey guys. Having to make this post makes me frustrated haha but at least you who are interested in possibly buying from here can at least read through my review and reconsider!! If you read the title you already know my overall feelings about the store, but please read on if you want to know the details about what happened T___T


If you don't already know about Storenvy it's basically a marketplace where they sell tons of different things (and some of the same things) from all different stores for various prices. I'm being vague aren't I? Hahaha sorry ^__^ But really anyone can open up their own online store through the Storenvy platform and you can sell anything from clothes to foods and other goods on there as well! Don't get me wrong, Storenvy itself is a pretty neat idea and really has opened up the people to expand their buying and selling options. That being said, since truly ANYONE can open up a store on here (I might even open one up soon ;D) it's super easy to get scammed on here. And me being me I thought I was careful enough to avoid those situations but I ignored all the red flags I noticed from the get-go from the website Mountain Deer on Storenvy.


Red flag #1: The website poses very low prices in comparison to some other shops that sell the same things. It may just seem like you're getting a good deal on something online sometimes, but other times it can just be another sign that it's a scam! Do your research and don't give into the good price like I did!

Red flag #2: They only have 8 sales! That was including mine! And I had no idea how long the website had been around prior to my purchase, how dumb of me. The only thing I knew was approximately the last time they updated their website, hence red flag #3...

Red flag #3: The latest offer on their website was during Christmas time of some year when they offered a free shirt with your purchase. 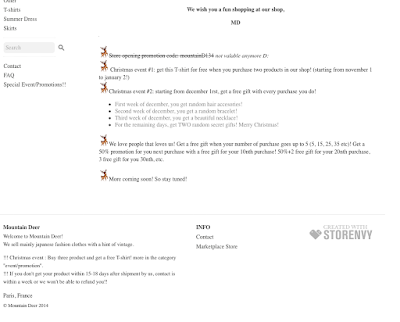 Red flag #4: They changed the price of the item as soon as I started browsing their website. I know there is someone operating the website currently because they accepted my money (sort of) and when I tried to buy an item I checked back a few days later it went from $7 then to $8 the next day and a week later it was up to $10! Mind you, the price only went up on the item I was trying to buy and nothing else. They also added an item that is popular in other stores for a ridiculously low price and no picture.


Red flag #5: Like I said, this store "sort of" accepted my money in two ways. When I tried to use my Visa gift card (I don't like using my debit online) it rejected it but the charge shows up online and says "Pending" under my order history anyways! Fishy...Of course I was stupid and my cheapness kicked in and I used my debit card anyways! Good thing they didn't fish my money out of my account or something o.o

Red flag #6: Shipping can be high sometimes if they're doing it internationally, that I can understand and that's why I was willing to pay $7.50 for shipping (so dumb). But I ignored the fact that the website said nothing about tracking information (or lack thereof) upon ordering from the store. Usually stores tell you how much you need to order to get tracking info but this store mentioned nothing at all about it T__T 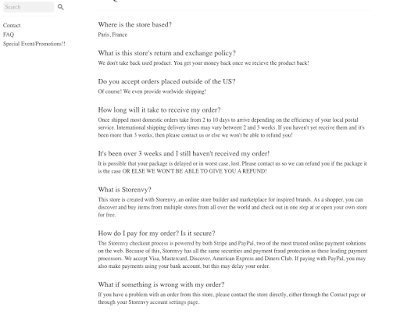 Those are some of the red flags I can think of right away but there were probably more. The FAQ looked promising and I thought since there was someone adjusting the prices of things in the store that the promises of "refunds" would be kept. But it was a week after my order and I still had not received any answer of emails from the merchant about my order and I knew it was too good to be true. Here's the full story from start to end:

I had been looking for this canvas bag for quite some time now. It's super cute but I couldn't find the original maker and instead I found it on Mountain Deer for $7 (at the time). I guess that's what I get for trying to buy a bag with a stolen design, I don't even know if the merchant has the consent of the artist to use this print!! Ugh. Anyways. After a few days of looking through the website and apparently trusting them I made a purchase (even after finding out my gift card wouldn't work on there!! YIKES! Don't do it you guys!!) Supposedly the items were shipped from "Paris, France" and that's why the FAQ said it would take 2-3 weeks and to contact them right away if the package didn't come before then. A couple days later when the money was taken from my account with the confirmation e-mail that Storenvy sends automatically for the merchant I fired them an e-mail saying I wasn't given any tracking information with my confirmation e-mail. No response. When the third week came but the package didn't I got worried and contacted the merchant for two days in every way I could, through the e-mail given by Storenvy as well as through their store. I even went so far as to look up the given e-mail on Facebook and messaged them on their (they had no profile picture or info and only a few friends) I even sent the emails in English and French just in case! By the fourth week I contacted Storenvy about the matter but all they did was e-mail the merchant to e-mail me (which they didn't) so I'll be following up with them about that. Finally fed up about the whole situation I decided to file a dispute with my bank online (and I won! woo hoo!) and got my money refunded to me after explaining my whole story ^>^ Which made me extremely happy~

The bottom line is, if you come across sketchy stores like this one, DON'T be cheap and try to dive in! I'm actually kind of glad I did it with my debit now because at least I could get my money back. Remember to always proceed online with caution!!

As always thanks for reading lovelies!!